Taiko came into our lives after it was clear Kita's physical disabilities would keep her permanently out of the performance ring. Since we had a young child in the household, getting an 8 week old puppy really did not seem like a good idea. We also wanted a dog that we knew was structurally very sound, so we started looking for an adult male shiba. We thought finding the right dog would take about two years. Little did we know that Taiko (formerly TJ) was looking for a new home.  We had contacted Pat Doescher of Hi-Jinx kennels in Black Earth, WI because her breeding program emphasized great structure as well as great temperaments- especially working temperaments. She told us of a stud dog she had in her kennel that she was considering retiring and she asked if we would be interested in meeting him at her place. We packed up the car, took a road trip and met Pat and 14 of her dogs. That fateful day we also met TJ. I loved him from the start, but he was a wild 18 month old boy and Pat was a bit concerned about him with our young son. After some thinking, she decided to take a chance on us and place him with us.

We immediately started training him in obedience. It took weeks for him to even learn to sit. We had decided to use clicker training exclusively with him and waiting for him to offer behaviors, not luring him. Although the initial training was slow, the foundation set the stage for us to be able to really get a truly clicker savvy dog that thought about what he was doing. That style of training has made all the difference for Taiko.

We decided we needed a very strong obedience foundation before starting agility training and although Taiko's not a huge fan of strict regimented obedience, he enjoys the less precise skills needed in rally obedience. He started competing in regular obedience and rally obedience in 2005. He wasn't 100% ready for the regular obedience ring at that point, and in hindsight, he wasn't fully ready for rally either at that time, but we did it and being in Novice A, it's just a difficult way to start out. Still, we continued on and got our RAE title- the first shiba ever! Since then, we've discovered APDT rally and via that venue we'll be able to work on getting ready for our CD.

In late 2004 we also started our agility training at Animal Inn in Lake Elmo, MN. We both loved it. You could say the rest is history. We started casually competing in agility in 2006. We kept ourselves in Novice levels through most of 2007 and have just recently decided to move onto the challenges and fun of the higher levels. We love to play together on course. We recently switched training schools to Bonnie Griep of Pawformance K9s in Elko, MN. This change has allowed us to work on some "Shiba Specific" problem s we were having. I have also been focusing on improving my timing and handling to set lines better and make sure Taiko gets info as fast as he needs it.

I never really know how far we'll be able to go together. Going far and gaining more titles is not really the goal anyway. We do performance events together because we enjoy playing and being in the ring together. The day it is no longer fun for either one of us is the day we are done. Although, I hope that day is far away.

Well, no sooner had I written that last sentence of, "I hope that day is far away," and I found out that the end of our agility career may be here and now. Taiko was diagnosed with a moderate grade medial shoulder instability. In English- he tore out the tendons and ligaments in his right shoulder chasing a rabbit off the deck and needed a lot of time to heal before ever contemplating running again, much less running in agility again. I tried to be optimistic, but some days were easier than others. On weekends where I had to pull entries to a show, it was particularly tough to be optimistic we'd ever do agility again. Even if we did, to what capacity had yet to be determined- lowered jump heights? No jumping? No contacts? No weaves? Here is a picture of him in his "hobbles" or shoulder brace- It took him many days to figure out even walking in the hobbles was possible. Never really knew Taiko was as stubborn as Kita. I guess there's still some surprises left in him for me to find out.

That experience had been a major learning curve for both of us. It mirrored the experience of a good friend of ours and her Chocolate Labrador Retriever Kallie. Kallies injury was different, but the result was the same- rehabilitation from the injury and a lot of soul searching to figure out what decisions to make next. When you have a dog that is very used to doing performance events and training a lot with you, having that taken away is a loss that is hard to describe. Also, you realize that what makes a dog enjoy doing performance events, doesn't make them necessarily the most pleasant house dog. They have excess energy and need to burn it off. Working a dog's mind tires them out more than just working their bodies. Tiring out the mind and body at the same time is ideal! We stocked up on a lot of bully sticks and brought out the dusty clicker to aid in some boredom relief.

Taiko is back running agility again and he's faster and happier than ever before. I was at a seminar once where the instructor said something on the lines of: You know your dog is having fun running agility when he's running on a course at the same speed he would be chasing a rabbit in the back yard. Well, I can honestly say my dog loves agility. I never would have fought so hard to get Taiko back into doing agility if I ever doubted his love for the sport. It's so fun, the morning of a dog show when I'm getting the final things packed in the car Taiko gets anxious. He follows me around the house checking what I'm bringing. Once I grab my agility shoes he KNOWS what we are doing and he can't contain his enthusiasm. He starts whining and whimpering to get into the car. He waits by the garage door and won't follow me any longer. Then, I finally give him permission to go out to the car with me and he bounces right into the car- not necessarily his crate, but we get him packed up and we leave. He settles in for the ride. We get to our destination and he again can't contain his enthusiasm. He visits HIS fans and bounces around until I have to walk a course. The first run of the day is typically a wash. He doesn't listen and heads to whatever obstacle he sees and grabs "extra credit" along the way. It's those runs that used to drive me insane because I would never qualify and I would get embarrassed. Now those runs make me giggle. I'm not going to take that enthusiasm away from him. I've got a dog that wants to run and run hard with all he's capable of giving me. OK, so he tunes me out every so often to take an extra obstacle. What's more important, he still wants to play the game.

We continue to play agility two years now past his injury. Some pictures we got recently: 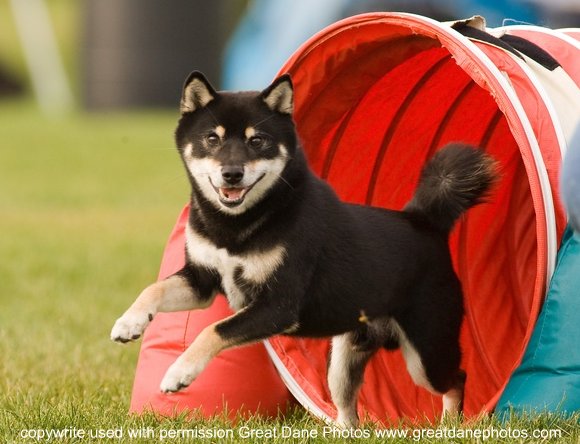 Our summer 2010 schedule is very full of agility, rally obedience, and even a dablle of conformation thrown in. Taiko continues to enjoy playing games with me in various performance activities.

We continue to play agility together and just recently Taiko finished the requirements for the CPE C-ATE title. For us that was 231 clean qualifying runs in level C. The Journey for the C-ATE was longer than that of the C-ATCHs, but not that much harder- especially that first C-ATCH after Taiko had been injured. We finished this title under Mark Giles, a Shiba breeder and judge. It was fun to run under a person who knew the breed so well, had done so well with his own dogs, and showcase what Taiko is capable of doing. It was one of those magical weekends that will live in my memory for a very long time. The future is still bright for Taiko. Finishing this title is not the end of our story together. I never wanted the finishing of a title, especially a large title, to be the day we retire from the ring. Taiko and I continue to play the game of agility together. Our schedule may or may not be a bit lighter now that we have this title. It's up to Taiko. If he seems to need a break, I will cut back. Winter tends to wind the season down a bit anyway. I have decided to put some AKC back into the schedule. The PACH title is not unreachable for us. I am just not sure I want to compete in AKC enough to get it. We will continue to play. Taiko's son can get the MACH title. That is their journey on the agility road.

Taiko is now in his retirement years. He turned 12 years old now and is still quite active and happy, but not so interested in doing things he chooses not to do. He ignores commands and says, "just a moment" more often than he used to. He gets silly and then realizes she should be dignified.  His new nickname is "T-Man" and it fits his quite well. The young dogs are stupid in his opinion, but they might as well stay. They have to do silly things like wait for their dinner and for the door to open. Taiko no longer has to. There are privileges to being older and wiser. We continue to play in agility, but it really is play now. Stepping up to the start line is comfortable. I know what to expect from Taiko on the course and he knows what to expect from me. Every so often the vortex of an off course tunnel is too appealing to resist and I just giggle at him. I handle with blind crosses now because I can be ahead of him and he still hates front crosses. Some things just never change.  We will attend CPE Nationals in June again in MN. My GSD friend is retiring Mira from all agility at that show. It is a wonderful way for Mira's Miracle Career to end- at a National event in her favorite venue. That is wonderful for them. It is not the way I want Taiko's career to end. For Taiko it needs to be a subtle transition out where we just slowly pull back the # of runs in a weekend and then the # of days to the point where he just is spectator and the young ones are running. Taiko will always be coming with the to trial sites. He loves going with to places. Home body this boy is not and never will be. He will continue to reign wherever he goes.